By now everybody (or almost everybody) knows Airbnb. It keeps coming up in discussions about holidays and I keep reading about it in the news. But let’s start from the beginning

Airbnb is an american internet based company, which provides people the possibility to rent for short term lodging. It started in 2008 but became more known in the current decade.

Usually, my husband and I were either booking a hotel or travelling with our VW van, so going to campings. But last year we decided to visit Tokyo and we found the prices of hotels far too high, so we decided to check Airbnb. We were amazed!

For a much lower price, we found a really cute apartment only for us, in a really nice area of Tokyo. The girl that offered it was so helpful, to explain to us all the facilities in the house (of course the writing was in japanese, so we needed a bit of a guide) and she was fast to answer our questions, such as if tap water is drinkable, or about the metro tickets and even suggestions. Five stars in hospitality, for an affordable price and a more personal communication than in hotels!

A few months ago my husband got a new job, so we had to find a new house and the one we liked was being renovated, so it would be available a month after his starting day in the new job. Under normal circumstances, paying a hotel for a month would have been far too expensive and we couldn’t have taken that house in the first place. But Airbnb gave us enough flexibility to make the choice we really wanted!

In the four weeks of June, we stayed in four different houses in the wider area of Reinach and Dornach, at the outskirts of Basel in Switzerland. In this case we did not have a whole house for ourselves, but in most cases the offer was for a room with a separate bathroom and the rest of the house shared with the family living in it. Breakfast was included as well. It was an amazing experience!

All four families were friendly! I was staying home most of the day while my husband was going to work and I had the chance to get into talks with the people hosting us! I got to practice my german, met a nice Chinese girl working as an au pair and rocked a small baby to sleep while his mom had to run to get his sister from the nursery! We had a normal kitchen to cook dinner, equipped with everything from plates and cuttlery to oil and spices. We were offered homemade jams for breakfast, tried homemade pizza cooked in a wood oven and I even got a small basil plant as a present from one of them! Even Lukas found a nice rocking chair to spend his week in Dornach! 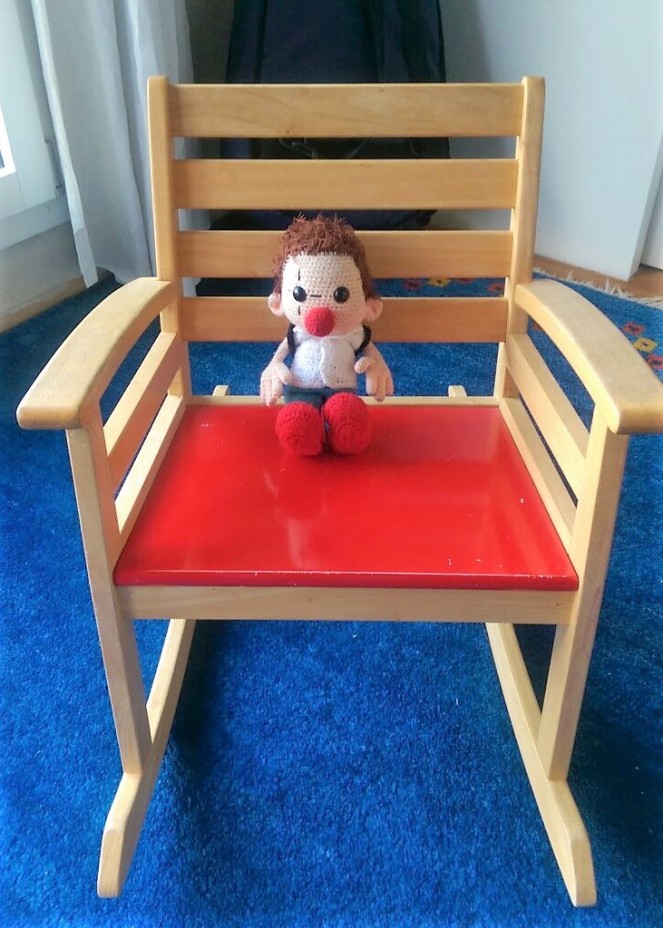 Usually hotel rooms are too depressing to stay for long. But a normal house, where people are living in, feels much more homely! Of course we didn’t miss the normal touristic help either. The weather was nice most weeks (as you can see from my photos) and I had the chance to explore the towns, visit The Goetheanum and had help from the hosts about the sites and the restaurants around or the closest supermarket. Especially the first week, the owners had a registered free ticket for both of us to use the public means of transportation in the wider Baselstadt and Baselland area!

Concerning the costs, we paid in total for the month of June less than what would be the monthly cost of our own apartment for the same month! If we would have to stay in a hotel, except from the problems of having just a room, the cost would have been enormous. The only alternative would have been a cheap and low quality hostel or something…

Airbnb is quite often mentioned in the news I read. In my homeland Greece they are trying to get the people that are not declaring their income from such rentals. And I have read of issues where people try to rent on a long term some lodging in areas that receive tourists and cannot find anything available anymore.

The European Commission issued a press release about a week ago, calling Airbnb to align their terms with the European Union consumer rules. Airbnb is expected to improve their price transparency and state clearly if the lodging is offered by a professional or a private host, since it makes a difference in the consumer protection rules covering the booking. They are also asked to clarify some terms and remove some other that do not comply with the general EU rules.

If I had a property available I would also register it with Airbnb. And I am happy to have this alternative to a hotel or some professional lodging to choose when it comes to accommodation, as it keeps the prices within the budget of a wide range of people and I prefer the personal communication that the individual hosts offer. But as anything else, it also creates some problems. I really hope they are resolved and Airbnb continues to offer its service!

Have you used Airbnb yourself? Did you have a good or a bad experience? What is your opinion?

We are waiting for our own house to get ready, so for a few weeks we are wandering around in Baselland, the canton we are moving in. In the area we spent this week, there are three towns next to each other: Reinach and Arlesheim that belong to the canton of Baselland and Dornach that belongs to the canton of Soloturn.

This week we are staying with a really nice couple at the border of Reinach with Dornach. And since I have some free time, I visited the main attraction of the area: the Goetheanum.

It is an architecturally interesting building, based on a model of Rudolf Steiner from 1924. The First Goetheanum was built in the period 1913 – 1920 and was an impressive wooden building that got destroyed by fire on New Year’s Eve 1922/3 (it took longer to build it than to destroy it!). The current Goetheanum was built in reinforced concrete between 1925 and 1928.

Rudolf Steiner (1861 – 1925) is famous for establishing the Anthroposophical Society, whose role is to understand that the world will be the way we think it. Anthroposophy means awareness of our humanity, and encourages individuals to develop an independent spiritual orientation, so as to avoid being swept along by all that the material world has to offer. Rudolf Steiner achieved to develop a method for gaining insight into the reality of the spiritual world. And this is what is housed in the Goetheanum, besides theatrical stages for performances, an auditorium, a library, a bookstore and many other.

The idea of anthroposophy is interesting, but what was really impressive is the architecture of all the buildings around! The Goetheanum (nr.1 on the map) is located on the top of a hill and all around the area are architecturally interesting buildings belonging to the wider complex of the Goetheanum, but not only. Have a look at the amazing buildings!

Transformatorenhaus, built in 1921 for public electricity supply transformers (nr.45 on the map)

Haus de Jaager, built in 1921, as a studio in memory of sculptor Jacques de Jaager. It is now a museum and residential house. (nr.5 on the map) 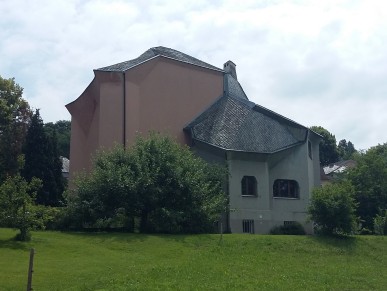 The side of Haus de Jaager 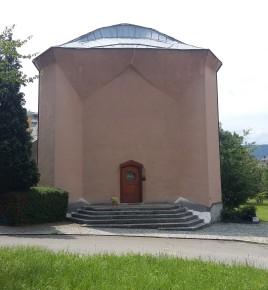 The front of Haus de Jaager

Glashaus, built in 1914, for cutting the glass windows in the first Goetheanum. Nowadays it is home of the Science and Agriculture sections. (nr.15)

Heizhaus, built in 1914, to house the heating system for some of the buildings in the area (nr.13). In 1991, the original coal-burning boilers were replaced by a gas-fired system. It was the most impressive building around!

Haus Duldeck, built in 1915 as residency for Nelly and Emil Grosheintz, donors of the land on which the Goetheanum was built. It now houses the Rudolf Steiner Archives. (nr.19) 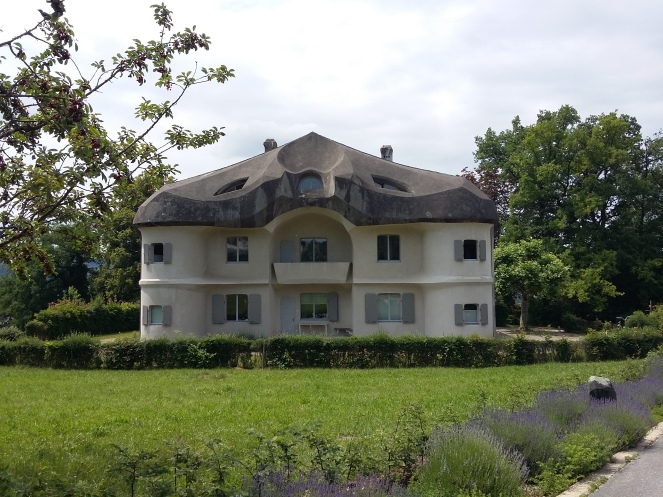 Rudolf Steiner Halde, built in 1924, with a eurythmy practice room and studio. Eurythmy is an expressive movement art. It now houses the Literary Arts and Humanities Section, puppet theater and finance and personnel departments. (nr.17) 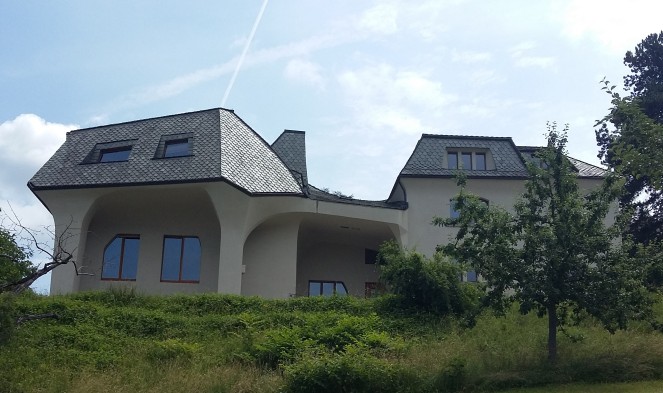 Verlagshaus, built in 1924, as stockroom for the Philosophical – Anthroposophical Publishing Company. It is now stockroom for the Archives. (nr.14) And in the back a glimpse of Schloss Birseck, that is added in our list of things to-do in Baselland. 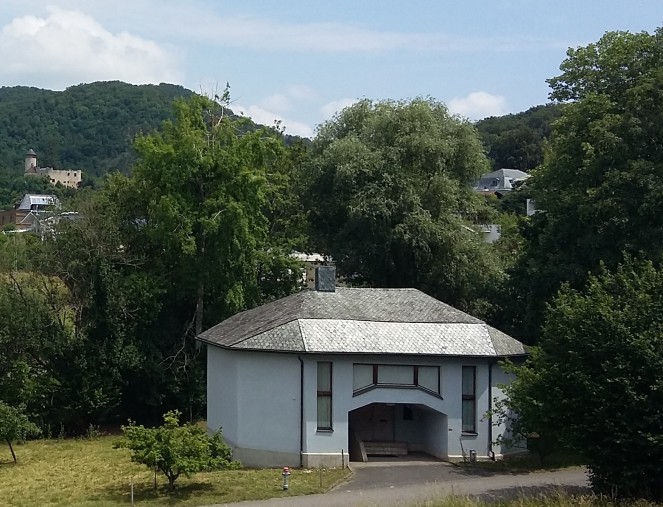 All of the above mentioned buildings are considered historical buildings and are based on designs by Rudolf Steiner. But they are not the only architecturally interesting ones around. The whole area is full of strange, unusual and innovative designs of architecture.

And before I forget, if you walk up the hill and reach the main entrance of the Goetheanum, you are greeted by a couple of these nice cows! 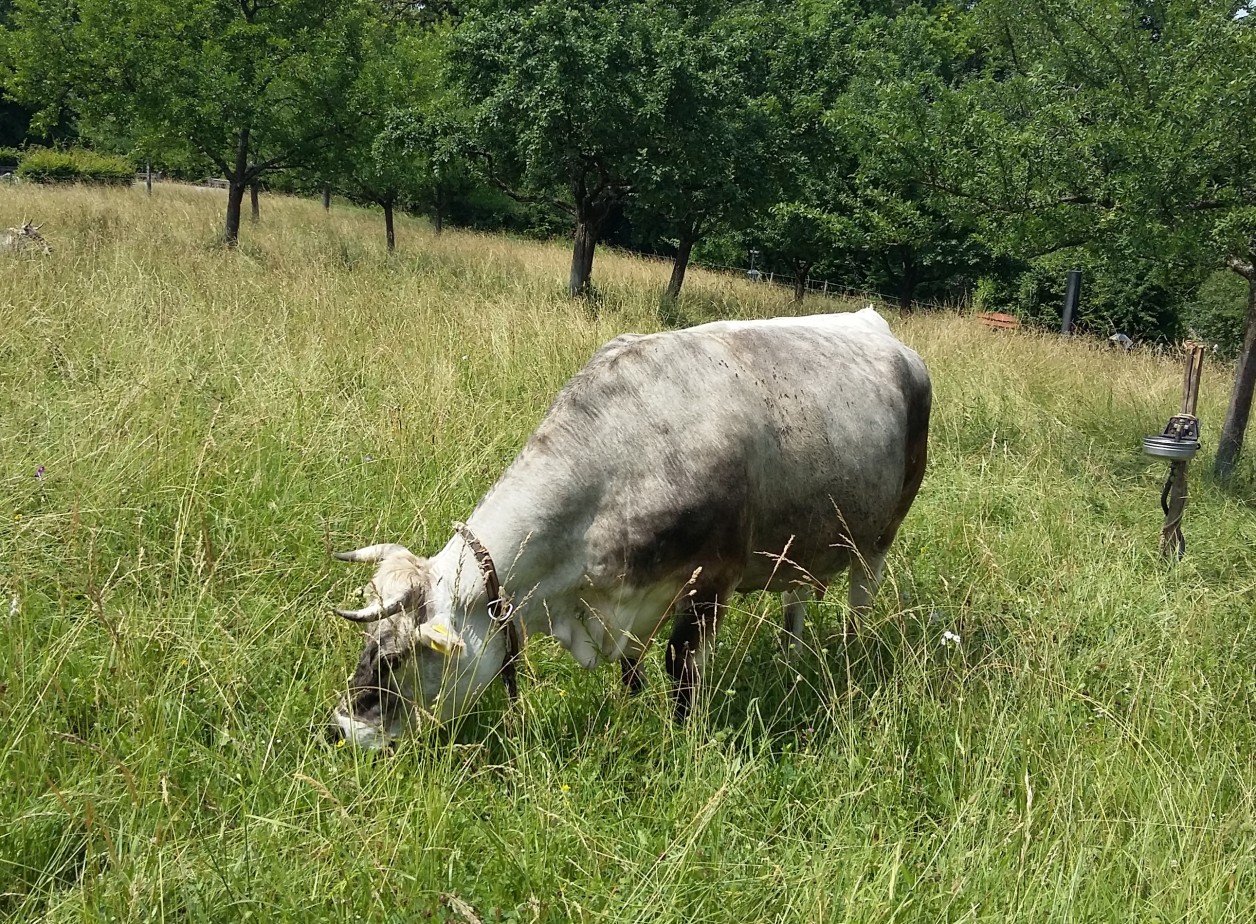 I really enjoyed discovering these new ideas and walking around noticing beautiful buildings. In addition, the graffiti that I saw already the first day at the train station now made sense: 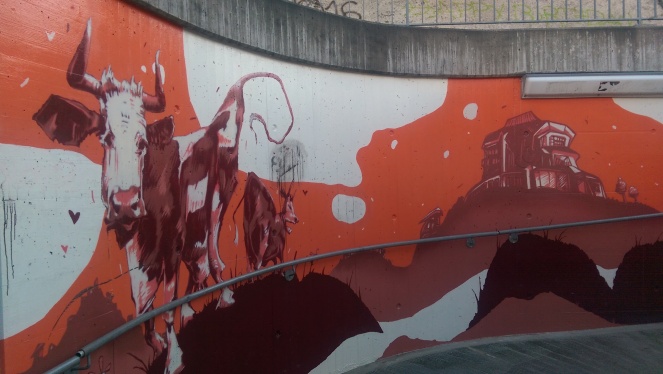